To share your memory on the wall of Gordon Caldwell, sign in using one of the following options:

Provide comfort for the family of Gordon Caldwell with a meaningful gesture of sympathy.

Gordon loved the Lord and to share his faith with others.
He was greatly loved and will be missed by all of those who love him.
A celebration of his life will be held Sunday, December 1, 2019, 1 to 6 pm, at his grandson’s home at 289 Main Rd. North, Hampden. In lieu of flowers, donations can be made to Stonebrook Family Ministry
https://southnashville.churchcenter.com/giving/to/snyders-fund
For a full obituary visit Memorial-Alternatives.com.
Read Less

Provide comfort for the family by sending flowers

Show you care by sending Flowers

We encourage you to share your most beloved memories of Gordon here, so that the family and other loved ones can always see it. You can upload cherished photographs, or share your favorite stories, and can even comment on those shared by others.

Posted Nov 06, 2019 at 09:42pm
Gordon, you chose to come into our lives and help raise us when you didn’t have to. Thank you for everything I learned from you. I learned what it looks like to live a sacrificial life from you. I learned how to paint a wall and build... well whatever I need to. I can turn a screwdriver with the best of them because you never treated me like I couldn’t just because I was a girl. I will always love you for that. I have never feared trying anything and you had a lot to do with that. Thank you for praying for me and my family. Thank you for loving Mom so well. Few women get to know what it’s like to have the love of a kind and devoted man. Your love for her in action is an example every man would do well to emulate.
Comment Share
Share via: 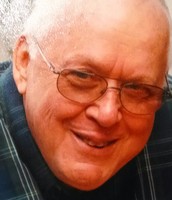