To share your memory on the wall of Jesse Wilson, sign in using one of the following options:

The gesture that can change the world

Print
Orono – Jesse Richard Wilson II, 62, passed away November 29, 2019, at his home with his family by his side, after a long illness. He was born July 2, 1957, in Bangor, the son of Jesse Richard and Dorothy Lucille Wilson.

Jesse graduate... Read More
Orono – Jesse Richard Wilson II, 62, passed away November 29, 2019, at his home with his family by his side, after a long illness. He was born July 2, 1957, in Bangor, the son of Jesse Richard and Dorothy Lucille Wilson.

Jesse graduated from Bangor High School. Following graduation, he worked for the Bangor Daily News in the mail room. He then enlisted in the U.S. army, serving seven years as military police, where his last assignment was at Checkpoint Charlie in Berlin.

After he returned home he entered the Maine Air National Guard and retired after serving with the 101st Security Police Flight and Supply Management.

Jesse enjoyed working with wood, constructing models, doll houses, and miniature furniture. One of his favorite places was the family camp, enjoying lobster cookouts with family and friends and working with his mom on several camp projects.

Jesse was predeceased by his mother, Dot, and brother, Robert “Chuckie” Wilson.

The family thanks the staff of Northern Light Homecare and Hospice for their care and support.

To send flowers to the family or plant a tree in memory of Jesse Richard Wilson II, please visit our Heartfelt Sympathies Store.

There are no events scheduled. You can still show your support by sending flowers directly to the family, or planting a memorial tree in memory of Jesse Richard Wilson II.
Visit the Heartfelt Sympathies Store

We encourage you to share your most beloved memories of Jesse here, so that the family and other loved ones can always see it. You can upload cherished photographs, or share your favorite stories, and can even comment on those shared by others. 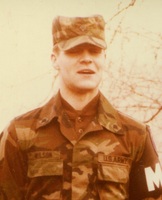